The Tome of Zhu

We are the things that were and shall be again!

Chainsaw Warrior has been reanimated into the digital age by Auroch Digital . The digital version practically simulates playing the board-game. It doesn't deviate from the original mechanics nor are the goals changed from the original to adapt the game for contemporary expectations. Physicality aside, in many ways talking about the one is exactly the same as talking about the other.

Chainsaw Warrior (1987) designer, Stephen Hand interviewed by Auroch Digitals Tomas Rawlings on BGG (here) mentions Sorcerer's Cave (Peter Donelly , 1978) as an inspiration, which is interesting because Sorcerer's Cave itself is a much overlooked gem in the fantasy gaming genre an early attempt at a D&D-lite dungeon-crawl board game. The contrasts between Sorcerer's Cave and Chainsaw Warrior are many, and all probably quite illuminating.


In Sorcerer's Cave one lays out a spatial map, of a cave, no less, and the player explores this space (turning over cards at each location to discover what is there) aiming to go down into the depths and out again, with whatever treasure you can collect before you get hit over then head by an Ogre too many times. Ultimately in Sorcerer's Cave the event deck of cards - which controls what happens within the cave structure is only ever stacked one way. The spatial mapping and player choices of where to move within that space is largely an illusionary conceit, albeit one that helps evoke the exploration narrative. Conversely we can consider something like Chess, the spatial decisions of where to place a playing piece are critical in determining the narrative and the win/lose status. The critical axis in Sorcerers' Cave being neither longditude or latitude or but vertical - the deeper the higher risks and rewards.

Chainsaw Warrior grinds up and discards the spatial metaphor like a useless appendage - instead the event cards become the space the Chainsaw Warrior passes through - the game collapses the 3 dimensional illusion of the Sorcerer's Cave magico-natural labyrinth into a singular, linear plotting of derelict architecture as time. Unlike Sorcerer's Cave or other dungeon-crawl boardgames DungeonQuest or Talisman, or structuralist fantasy myth The Hero With a Thousand Faces (Joseph Campbell, 1949) for Chainsaw Warrior there is no returning from the underworld with a great treasure from a dragons horde, no Crown of Command to rule the world, no boon or insight retrieved from the subconscious mind, no alchemists gold emerges from the darkness of the nigredo.  The Chainsaw Warriors aim is only to remove the Darkness or be killed in the attempt, it is a long, grim, dark, march to death, it's not a question of winning, it's a question of surviving long enough to get the job done.*

The emphasis on time, and specifically a unidimensional space-time. leads one to re-consider the narrative from being "You have 60 minutes to save New York" and subsequently failing or suceeding to being "You are a cyborg warrior stuck in a pre-apocalyptic time loop" running repeated, iterative attempts.  The Chainsaw Warrior is essentially a splatterpunk Groundhog Day (Harold Ramis, 1993) - reliving the last, final, ultimate, cataclysmic hour of New Yorks existence over, and over again  Each time you play, trying a new combination of equipment in order to break the time loop paradox caused by the Darkness's dimensional warping and the destruction of spatial reality. Forever crushed upon the grinding wheels of Karma, within each reincarnation the Chainsaw Warrior must circle through the kaleidoscopic abandoned multi-story office block of Hell. Each time, The Chainsaw Warrior dies and again is reborn, gets kitted up and gets sent out to fight. Each time the Chainsaw Warrior learns a little more of what must be done, what equipment makes him better, harder, faster, stronger, what he needs to destroy his foes, and each time he is unleashed against an unending relentless nightmare of death and gore and passageways and mutants and radiation and shotgun shells and broken lift-shafts and filth and rats and undead and chainsaws...


It's this one-way-ticket-to-Hell concept that the Chainsaw Warrior exploits to finally hack off and nail to the floor on any notion of 'player agency' - gamecrit speak for the ability for the player to make meaningful decisions which effect the outcome of the game. Chess perhaps, has  99% agency - Roulette 1%, and Chainsaw Warrior maybe like Russian Roulette but with a shotgun-chainsaw bayonette.

The Chainsaw Warrior has almost zero strategic  decisions to make during the game - instead we watch a grim, pessimistic splatter comic book, each ard a frame from a graphic novel, which unfolds with variation with every replaying. Indeed,  the digital version of  the game starts off with a nice digital motion-comic (one of the few sanctions to modernisation) wheras the original board game was packaged with a dead-tree comic book...

It's worth noting that the board game books and box art is 90% the work of Brett Ewins, whose work on 2000AD - Bad Company, along with stints on Rogue Trooper and Judge Dredd, is classic high thrill-power stuff. He should also be well known to oldschool games fans for his work on 80s Games Workshop products, Chainsaw Warrior (obviously) Blood Bowl and Kaleb Daark. However, his unique aesthetic is missing from Aurochs digital conversion, and they take it in a new direction, gone are Bretts bold, graphic lines and saturated colour, and in comes digital airbrushings in murky colours, not a million miles away from the kind of thing 2000AD or Games Workshop might do today.


Another big change in the dynamics between analogue and digital is that the board-game gives the player something to do, albeit mostly bookkeeping and dice rolling, whereas the digital version elevates the player away from the mechanics and instead tapping a touchscreen like interface (I'm playing on Steam on a Windows VM on a Mac - a tablet or iPad or what-have-you might feel different) perhaps choosing which tool to use here, or what weapon to use there,  but mostly tapping cards, and watching the 3d dice roll without really affecting the outcome. Cheating, or "house-ruling on the fly" is made impossible by the digital medium, the Chainsaw Warrior cannot change or control his narrative, only react and interpret it, which is in itself strongly thematic. Enslaved to his fate the Chainsaw Warrior can only look on with grim determination...


In many ways Chainsaw Warrior doesn't have many of the features we commonly recognise as a game at all, it's more like a very focused random narrative generator. Like a pack of 16th Century Tarot cards - which were originally designed as a game but evolved into a divinatory story-telling medium - or William Burroughs Cut Up Method from the 1960s, and no doubt some early 1990s hypertext narratives and Interactive Fiction experiments , Chainsaw Warrior conjures a story out of a closed set of random factors.   The Tarot as narrative generator explored in great effect in Castle of Crossed Destinies (Italo Calvino, 1973), and the weaving of tales of unreliable narrators,  through the mutability of the symbolism of the cards is key to it's success, taking in medieval literature and mythological sources. The Chainsaw Warrrior s pictorial vocabulary is decidedly more specific and direct, less occult and more visceral. Each card tun dragging the reader step by step through a grisly comic book adaptation of a John Carpenter / Sam Raimi 80's video nasty.

The Chainsaw itself is Splatter genres signifier par excellance , from Texas Chainsaw Massacre (Hooper, 1974) to Hollywood Chainsaw Hookers (Olen Ray, 1988), through Evil Dead II (Raimi, 1987) is possibly the first where a doomed (and time-locked) hero goes to town on a bunch of good for nothing Deadites with a power tool.

Chaos Agents - the demented assassin-scumbags with their hoods and masks, quite clearly Red Redemptionists (a cult dedicated to the god of war found within the Warhammer mythos, and taken wholesale from Druillet Lone Sloane comics - the centrality of visual storytelling underlined once more) Perhaps in questionable taste, it is tempting to read them as a kind of Jihadi Terrorist Incursion, after all this is NY, this is a skyscraper, this is a kind of apocalypse...


... or perhaps mid 2010s cyber-terrorists and hacktivists. The modernity and relevance of the Chainsaw Warrior's symbolism becomes applicable to a whole new set of circumstances and cultural narratives.


With his twisted lump of undifferentiated flesh, the many mouths and eyes, loss of humanity - a pathetic and dangerous radioactive monstrosity. 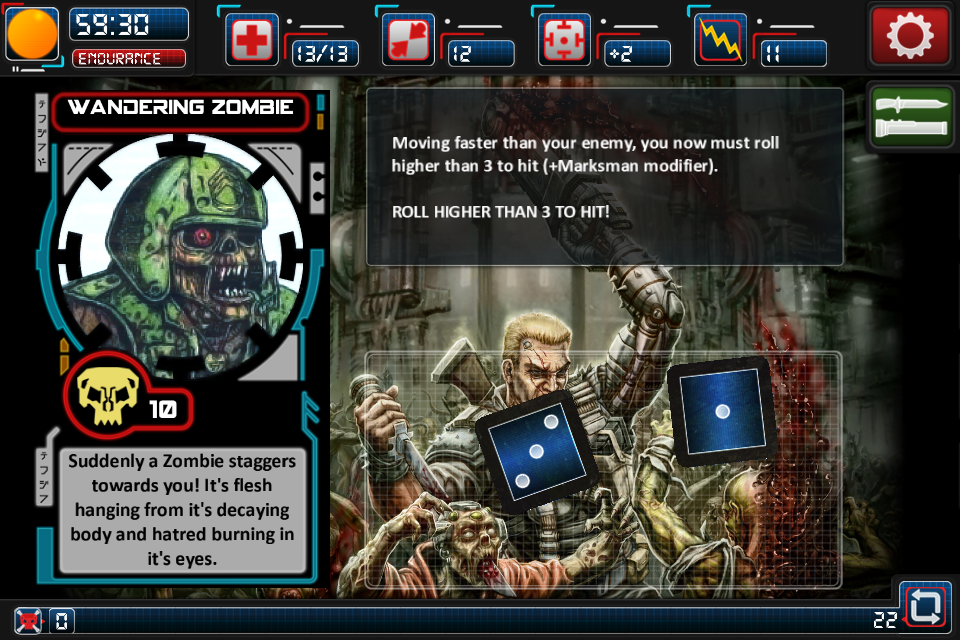 Romeros Zombies are by and large allegorical figures, and Zombies remain as contemporary a symbol of society as any other, given the flashmobs, tv-series, endless sequels and plethora of games. The nature of the  Wandering Zombies is peculiar, while we might see in the Chaos Agents the cultic harbingers of doom, the outsider instigators of the apocalypse  - the Wandering Zombies all appear to be military figures, rather than say civilians or hobos or cheerleaders trapped in a municipal building. Perhaps they are revenants of a failed attempt to stop the Chaos Agents, or perhaps time-locked reanimated cadavers of the Chainsaw Warriors own previous attempts at conquering the Darkness, much like the ghosts in Nethack - and The Meat Machine (below), the Wandering Zombies seem to provide a dark mirror of the protagonist - a Karmic demon that must be overcome. As such their wandering nature, as opposed to the Chainsaw Warriors single-minded purposefulness the unwanted attribute which must be overcome.


Might be worth noting that the Meat Machine is something of a design precursor to the Khornemower. That the inter dimensional rift is throwing out evil monsters that apparently mirror the cybernetic and single-minded nature of the Chainsaw Warrior himself - taken to a dehumanised, monstrous extreme raise questions. It reinforces the idea promoted by the militaristic Wandering Zombies that the enemies are aspects, be they Karmic or distorted time-locked reveneants of the Chainsaw Warrior himself, surfacing the repressed shadow-self and hacking their organic face off to show the true face of gleaming red eyed mechanised skulltronica beneath.

While the cyber-gore theme is quite evident, there's nothing truly horrific in the boardgame - the Zombies drawings are all slightly and wonderfully icky, but certainly nothing like an actual splatter movie or the red pixel-sprite drenched gore of Doom. The digital version gets a splatter of blood on the screen during hand to hand combat, but it's a 15 rating perhaps rather than an 18 - that said I think gorehounds and horror freaks would get a lot out of its grimy atmosphere and remixing of familiar themes.


Chainsaw Warrior isn't an easy thing to get into, for a start 'procedurally generated horror comic books' are hardly mainstream media, and someone arriving at  Chainsaw Warrior with a deeply gamist or strategic mindset is likely to be let down by the experience.  Like the burgeoning and controversial 'video nasty' splatter movie genre, and the experimental literature that it parallels - Chainsaw Warrior requires the right frame of mind to approach. Sometimes you want a mentally challenging puzzle or a feeling of achievement or a laugh with your mates around a table with a few beers. Chainsaw Warrior isn't any of that. It is an awkward thing, it's not a Skyrim or Avatar that seduces with it's glossy sugar-coated visuals, it requires the player gives it attention, and engage their imagination in making the experience work play.


http://chainsawwarrior.net/  for android, PC, iPhone and whathave you for about £3 / $5 which is reasonable, certainly cheaper than picking a copy up 2nd hand on ebay and opens up much the same interdimensional doorway...


* This is very much like The Lord of the Rings, and there are several parallels, the 9 Ringrwaiths and the 9 Agents of Chaos, the hopeless task of lazering Darkness, the hopeless task ofdestroying The Ring, the Radiation damage track could the corrupting influence of The Ring, hugely powerful enemies like the Meat Machine could be the Balrog, zombies as Orcs, elven rope as rope launcher. Add some card art by John Howe, and the road goes ever on, and on...